Dwayne Scheuneman, A REVolution In Dance 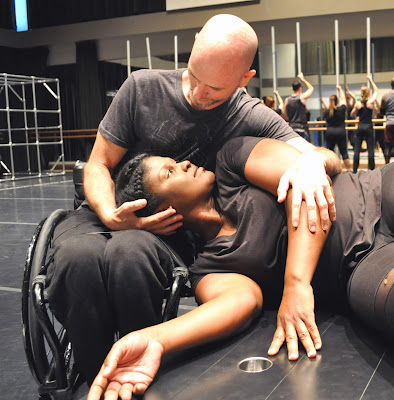 Dwayne rests his stubbled chin on the palm of his left hand. His eyes dart from one student to the next. The man’s lithe body is taut with anticipation, his eyes intense and piercing. While he instructs, Dwayne’s wheelchair undulates beneath him, merely an extension of his body. Together, they swerve and pivot, gracefully flowing in and out of routines. The dancer’s cheerful demeanor is infectious and his grace is undeniable. These qualities translate seamlessly to his development of choreography, and after watching him go through a few moves with his beaming students from REVolutions Dance, you’ll feel the unmistakable urge to dance too!
Dwayne Scheuneman’s life didn’t always revolve around dance. On July 4th of 1995, everything changed. After diving into a backyard swimming pool, his head collided with the bottom. The resulting injury propelled him into a new life as a C7 quadripilegic.
Like all good stories, Dwayne’s life as a person with a disability began with a bit of exploration. In the late 1990’s, he competed in wheelchair track and field. In 2002, after the intense heat of the Florida summer, Dwayne was looking for different ways to maintain his physique. After all, it was the off season and he, “...wanted to try a little cross training.”
During a visit to the James Haley VA hospital, Dwayne rolled by a community bulletin board. A handwritten notice caught his eye, detailing dance classes for people who use wheelchairs. Figuring that it would only last a few months, Dwayne decided to give it a try. He started attending the classes in September, taught by a woman named Elizabeth Edelson. Soon after, Dwayne and Elizabeth choreographed and performed a duet at Disney World. If it wasn’t for Elizabeth and Asher Dance Eclectic, Dwayne never would’ve gotten involved with dance. 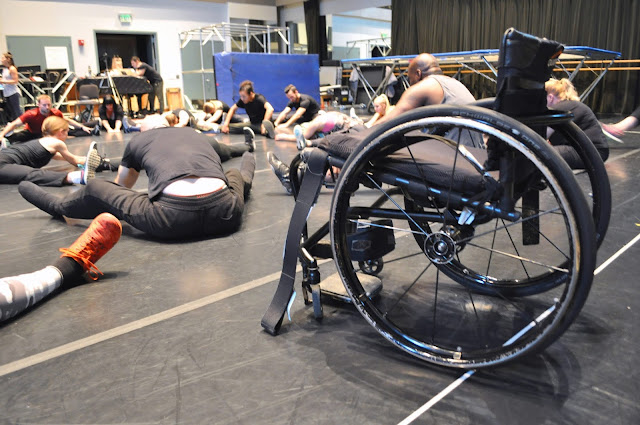 After his first performance, Dwayne began to embrace the collaborative nature of dance. He enjoyed the opportunity to work with people on this level, which was far more intimate than his experiences with track and field. His transition into dance seemed to be a natural progression: “I never made a conscious decision to stop competing in sports, it just kind of happened. Dance opportunities kept coming and I just kept accepting them. In the beginning it was small opportunities like a single, short duet and at local events or schools.” 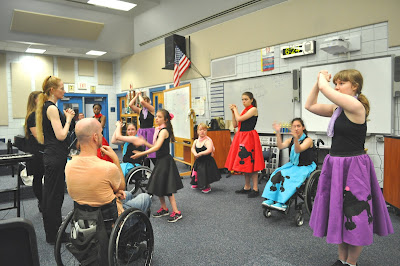 One of REVolutions Dance’s best qualities is its ability to cater to a wide array of dancers. Ranging from youth to professional levels, the organization regularly conducts full-length dance ensembles, including professional dancers with and without disabilities.
Though extremely fulfilling, Dwayne felt as if his endeavors in dance were missing something. Prior to his injury, Dwayne served as a member of the United States Navy. Now that he was a veteran, the man had a strong drive to use dance as a means of working with those who have fought for our country. A dance company named Diavolo gave him that opportunity. 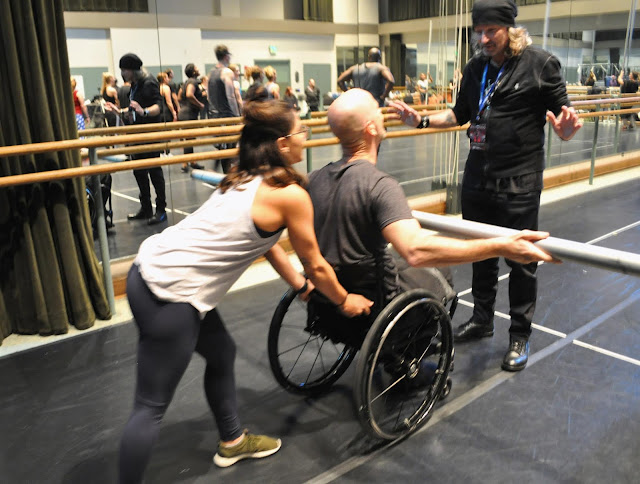 Diavolo is an extreme and experimental group of dancers. Choreographed by the extremely talented Jacques Heim, the group has performed jaw-dropping feats that push dancing to its limits. In an attempt to arrange a piece that centered around veterans, they reached out to the Straz Center and to the dance department at the University of South Florida (USF). Since Dwayne had worked with many of the dancers from USF, they not only asked him to take part in the performance, but to help coordinate it, 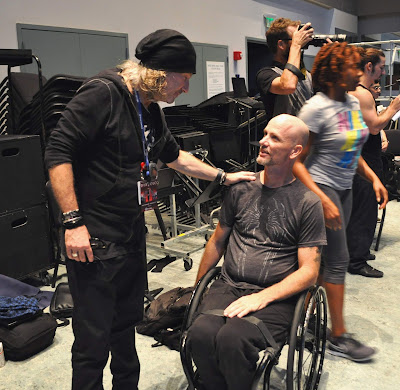 “The dance instructors from USF have worked with me many times over the years. So when [Diavolo] asked [USF] to help coordinate this event and reach out to local vets and dancers, they felt strongly that I, being a dancer and a vet, would be a good fit for the project so they reached out to me.”
Diavolo, meaning "Devil" in Italian, was certainly one way to describe Jacques, the founder and lead choreographer of the Diavolo dance troupe. Watching him with the dancers, his devilish work ethic started to emerge. It was a unique experience, because he knew exactly how each routine should look. His genius, radiating throughout the practice hall, unknowingly enveloped everyone in attendance. His demeanor was stern, yet playful. Jacques commanded everyone's trust and unnerving loyalty. He demanded it! After all, much of the choreography could charatably be considered “death-defying!” Was he thinking to himself, "How can I make these moves even more dangerous?" 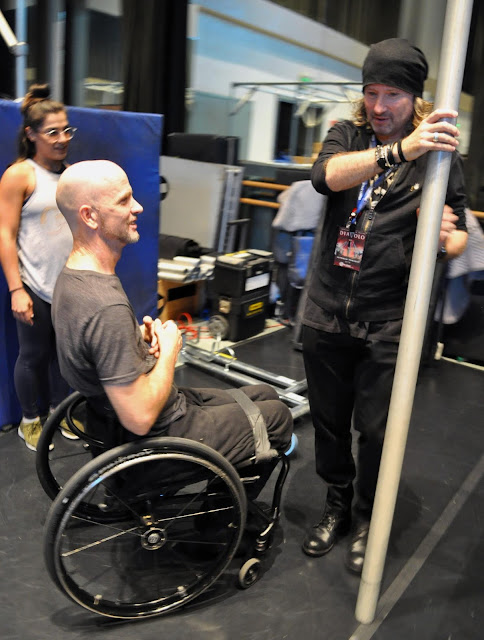 Everything about Diavolo’s routine was extremely intense. Their warm-ups seemed exhausting and would’ve completely worn out the average person. The first segment of practice under their belts, the next phase began. In their incomplete form, the intricate dance sequences were mesmerizing. Dancers maneuvered unwieldy props with grueling effort. Jacques knew what he wanted. With the twirl of each, metal rod, you could see his mind working. He demanded and received the best, from both his dancers and the veterans who were practicing. 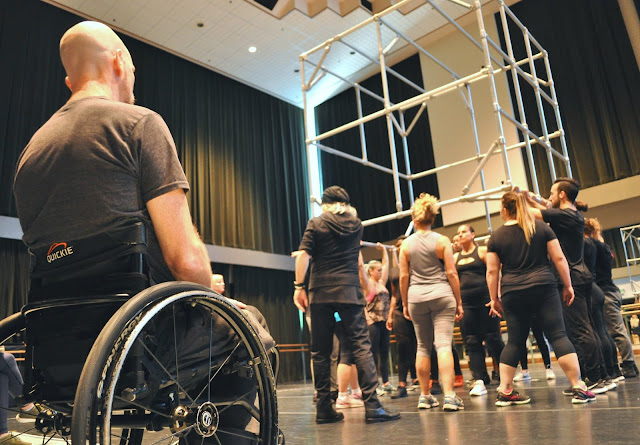 Dwayne had a central role in the choreography. As such, his position was held in an elevated esteem. Some of the routine’s more intricate maneuvers were saved for him. Jacques would push Dwayne, and Dwayne would deliver. The movement between Dwayne and his dance partners began to flow in a natural fashion. The makings of a masterpiece began to unfold before the eyes of everyone in attendance. As Dwayne moved from one routine to the next, his wheelchair became a blurry extension of his body. At this moment, it became apparent that wheelchairs could lend themselves to graceful movement. Wheelchair users can add significant depth to a performance, and achieve forms of dance that are impossible for their able-bodied counterparts to achieve. Dwayne had mastered this art form. Now, it was a matter of him mastering Jacques’s routine. As a fellow wheelchair user, Dwayne’s adapted agility and dexterity made me rethink my entire perception of wheelchairs, of dance, and of perceived limitations.
If you, or anyone you know, might be interested in REVolutions Dance, it is located at: “Hope U Dance” dance studio, 255 Forest Lakes Blvd., Oldsmar Fl, 35677.
Click here to visit the REVolutions Dance website!
Diavolo Dance Theatre: Architecture In Motion will be performing at the Straz on October 25, 2019. For more information, and to purchase tickets, click here. 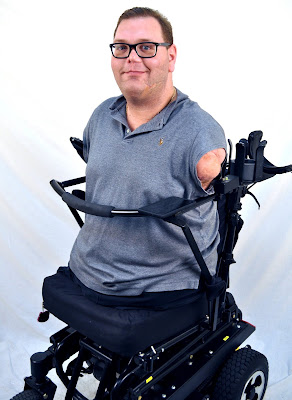 Accessibility Grade: A I've been a power wheelchair user since the age of three, so you can say that I've become pretty good at snif... 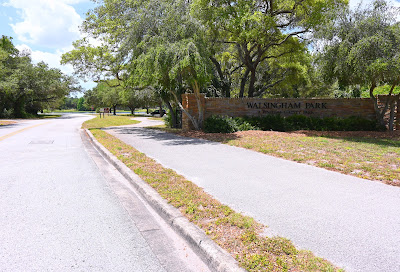